Local MP calls for Eurovision contest to be brought to Blackpool 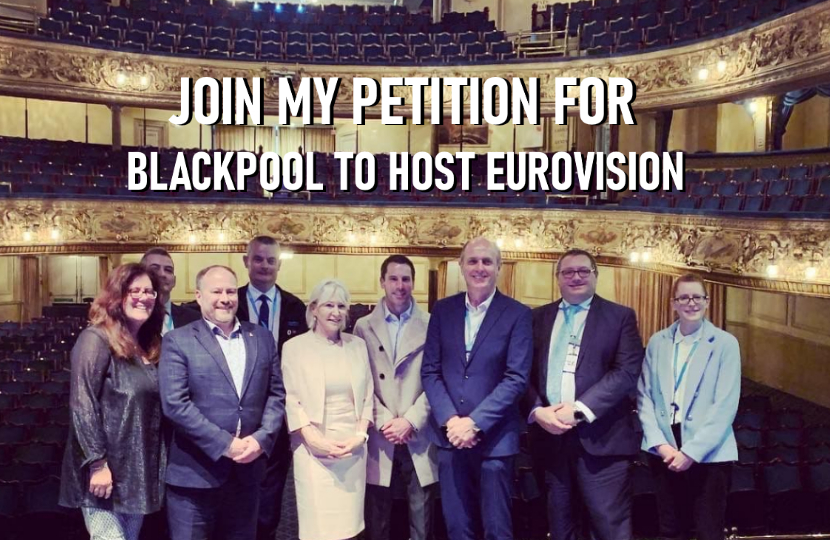 The 2023 Eurovision Song Contest will not be in Ukraine but in support of Ukraine. We are grateful to our BBC partners for showing solidarity with us.

I am confident that together we will be able to add Ukrainian spirit to this event and once again unite the whole of Europe around our common values of peace, support, celebrating diversity and talent.

It is a matter of great regret that our colleagues and friends in Ukraine are not able to host the 2023 Eurovision Song Contest.

Being asked to host the largest and most complex music competition in the world is a great privilege.

The BBC is committed to making the event a true reflection of Ukrainian culture alongside showcasing the diversity of British music and creativity. The BBC will now begin the process to find a [host location] to partner with us on delivering one of the most exciting events to come to the UK in 2023.

I was glad to read the announcement that the UK will host Eurovision 2023. Where better to host the competition than Blackpool, the traditional home of British entertainment?

Hosting Eurovision would provide a massive boost to the town and our local economy. Blackpool would be a fantastic location for Eurovision as we have ample hotel accommodation and first-class venues.

I will be urging the local authority to put in a hosting bid as soon as possible. This Government has invested massive sums into entertainment venues in Blackpool; let’s show them off to a global audience!