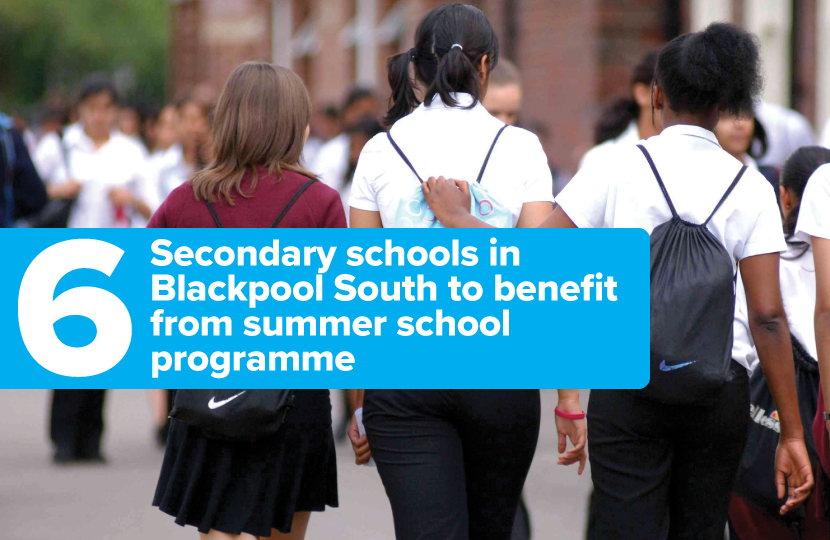 Scott Benton has welcomed the announcement that 6 schools are among the 2,820 secondary schools across England that will be hosting a summer school over the school holidays, as part of the Conservative Government’s £200 million Summer School programme.

The summer schools will provide a range of extra-curricular and academic catch-up activities to boost children’s opportunities to catch-up.

Pupils will benefit from learning essential maths and English skills while getting involved in sports, drama, and music – as well as the option of theatre trips, workshops with authors, cooking classes, theatre trips, and sports sessions.

The summer schools will help pupils establish and build friendships before the start of the next school year, improving their confidence and improving mental wellbeing – particularly for Year 7s making the transition up to secondary school.

High quality online resources are also being provided for all pupils and teachers for throughout the summer holidays by Oak National Academy, to give pupils the confidence they are ready to start their next school year.

Evidence from the Education Endowment Foundation (EEF) shows that pupils who benefit from summer school programmes can make two months additional progress in comparison to pupils who don’t attend, and up to four months’ extra progress if the summer schools involve small group tuition. They also provide a range of benefits to families and communities by providing support for vulnerable young people.

The funding provided for the Summer School programme, to participating schools, forms part of the long-term Education Recovery programme, which has seen £3 billion invested to date in our school system, providing vital support for pupils.

Since June 2020 £1.5 billion has been invested in national tutoring, £400 million for training and professional development, and now £200 million for summer schools this summer. This is on top of a £650 million universal catch up cash boost for secondary schools this year and a £302 million recovery boost for next year.

“The pandemic has had a huge impact on the last school year for pupils – and I am committed to helping everyone affected catch up on lost learning and missed experiences before the start of the next academic year.

“The extra £200 million the Conservative Government are investing will help Schools put on summer schools and provide vital learning opportunities for pupils – boosting pupils’ learning and their confidence with extra lessons and extra-curricular activities like sports, music and drama.

“This will help set pupils in Blackpool South up for the future, giving them the best opportunity to reach their full potential and get the world class education they deserve.”

“It is very good to see that so many children will now have the opportunity to enjoy clubs and activities, building friendships and supporting their mental and physical health, alongside their educational progress.

“We have announced £3 billion so far to support education recovery, and are focusing now on helping children catch up ahead of the next academic year. Summer schools are an integral part of the overall effort to recover from the disruption caused by the pandemic”.

Six schools in the summer school scheme in Blackpool South are: