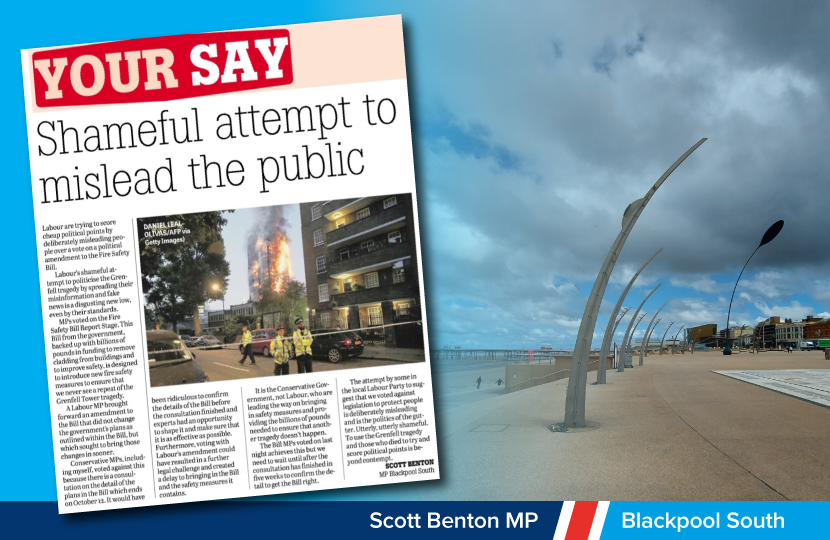 Letter to the editor.

Labour are trying to score cheap political points by deliberately misleading people over a vote on a political amendment to the Fire Safety Bill.

Labour shameful attempt to politicise the Grenfell tragedy by spreading their misinformation and fake news is a disgusting new low, even by their standards.

MPs voted on the Fire Safety Bill Report Stage. This Bill from the government, backed up with billions of pounds in funding to remove cladding from buildings and to improve fire safety, is designed to improve new fire safety measures to ensure that we never see a repeat of the Grenfell Tower tragedy.

A Labour MP brought forward an amendment to the Bill that did not change the government's plans as outlined within the Bill, but we sought to bring those changes in sooner.

Conservative MP's, including myself voted against this because there is a consultation on the detail of the plans in the Bill which ends on October the 12th. It would have been ridiculous to confirm the details of the Bill before the consultation finished and experts had an opportunity to shape it and make sure that it is as effective as possible.

Furthermore, voting with Labour's amendment could have resulted in a further legal challenge and created a delay to bringing in the Bill and the safety measures it contains. It is the Conservative government, not Labour, who are leading the way on bringing in safety measures and providing the billions of pounds needed to ensure that another tragedy does not happen.

The Bill MPs voted on last night achieves this, but we need to wait until after the consultation is finished in five weeks to confirm the detail to get the Bill right. The attempt by some in the local Labour Party to suggest that we voted against legislation to protect people is deliberately misleading and is the politics of the gutter. Utterly, utterly shameful.

To use the Grenfell tragedy and those who died to try and score political points is beyond contempt.