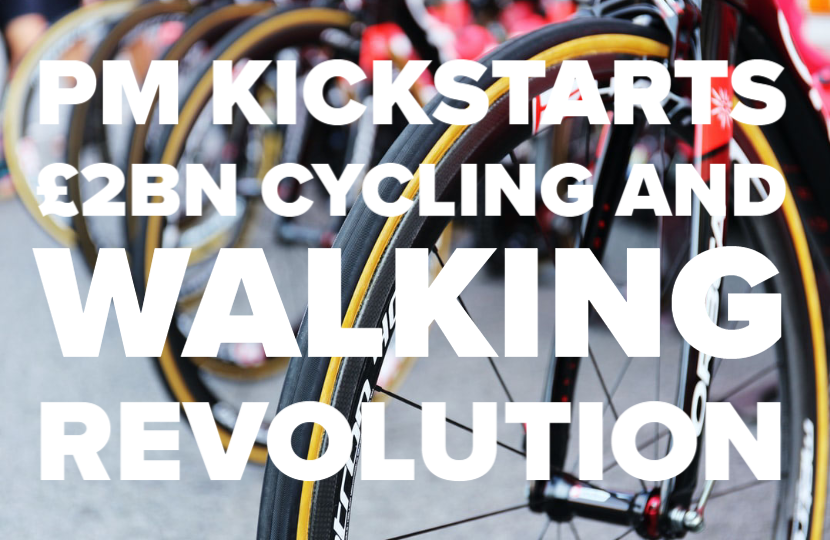 Thousands of miles of new protected bike lanes, cycle training for everyone and bikes available on prescription will be rolled out under new plans to overhaul cycling and walking in England launched by Prime Minister Boris Johnson today (Tuesday 28 July).

Tackling the causes of ill health, not just the symptoms, is vital to help reduce demand on the NHS, and taking up cycling has been proven to offer huge benefits for people’s physical and mental health.

The new plan aims to build on the significant increase in the number of people cycling during the pandemic. It sets out a comprehensive, long term vision to increase active travel and embed the benefits of walking and cycling into how we live, work and get around.

Gear change: a bold vision for cycling and walking

From helping people get fit and healthy and lowering their risk of illness, to improving air quality and cutting congestion, cycling and walking have a huge role to play in tackling some of the biggest health and environmental challenges that we face.

But to build a healthier, more active nation, we need the right infrastructure, training and support in place to give people the confidence to travel on two wheels.

That’s why now is the time to shift gears and press ahead with our biggest and boldest plans yet to boost active travel – so that everyone can feel the transformative benefits of cycling.

We’ve got a once in a lifetime opportunity to create a shift in attitudes for generations to come, and get more people choosing to cycle or walk as part of their daily routine.

The measures we’ve set out today in this revolutionary plan will do just that. No matter your age, how far you’re travelling, or your current confidence on a bike – there are plans to help and support you.

By helping to fix your bike – or get an electrically powered one; by increasing storage space at stations, on trains and buses; and by introducing more ways to keep pedestrians and cyclists safe, we’re making it easier than ever to make active travel part of your daily life, and leading England to become a great cycling nation.

To encourage people to continue to take up cycling, cycle training will be made available for every child and adult who wants it, accessible through schools, local authorities or direct from cycle training schemes.

So that more people can make cycling part of their commute or daily routine, more cycle racks will be installed at transport hubs, town and city centres and public buildings, and funding will go towards new bike hangars and on street storage for people who don’t have space to keep a bike at home.

The commitments in the plan, which will be funded by the £2bn of new money announced earlier this year for walking and cycling, also include:

New, higher standards for cycling infrastructure have also been published in updated guidance today, in order to make sure that schemes are better designed around cyclists’ needs and to make sure they can support a larger number of cyclists in the future. These higher standards will make clear that schemes which consist mainly of paint, which make pedestrians and cyclists share the same space, or which do not make meaningful change to the status quo on the road, will not be funded. These standards will be overseen by a new inspectorate, Active Travel England, which will be responsible for the cycling budget and help make sure schemes are compliant with the new standards.

Alongside the launch of the strategy, today the first batch of bike repair vouchers worth £50 will be released later tonight to the public in a pilot scheme to encourage thousands of people get back into cycling.

By encouraging people to get their old bikes out of the back of the shed fixed and safe to ride, the scheme will help more people choose cycling over public transport as a convenient way to travel, for example when going to the shops or seeing friends.

Due to overwhelming demand for cycle shops’ services during the pandemic, vouchers will be released in batches in order to help manage capacity across participating stores. The first 50,000 will be available just before midnight tonight (Tuesday 28) on a first come first served basis to those who register online. Government will work closely with industry during this first pilot launch to monitor its success and adapt the scheme as necessary before rolling it out more widely.

Fix your Bike Voucher Scheme: apply for a voucher

Fix your Bike Voucher Scheme: register as a bike repairer

Protecting our history and heritage from censorship