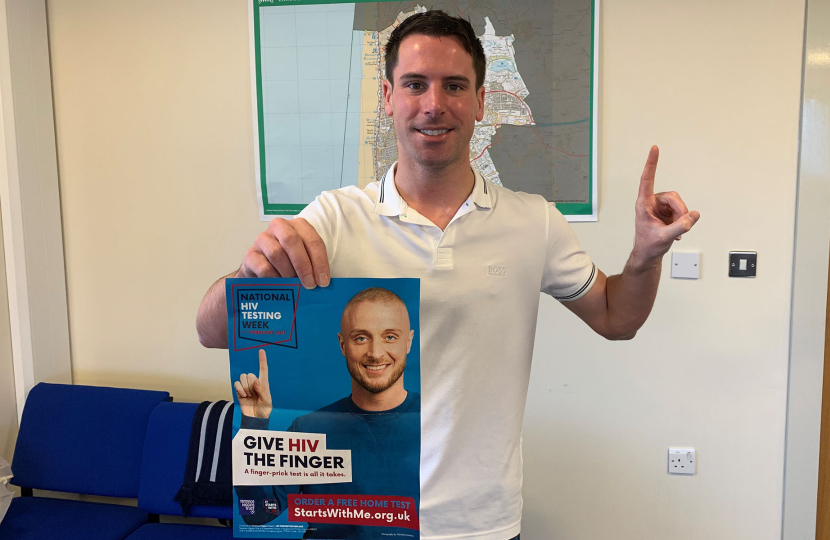 To mark National HIV Testing Week (1-7 February 2021), Blackpool South’s MP, Scott Benton, is calling on local residents to test for HIV and know the facts about the virus.

In England around 6,000 people living with HIV do not know their status, with stigma often one of the biggest barriers to getting tested.

In a bid to tackle HIV stigma and show how quick and easy it is to do an HIV test, Scott Benton completed a Simplitude By Me HIV self-test from charity Terrence Higgins Trust which gives a result in less than 15 minutes.

There’s now lots of ways to test for HIV. However, the safest option for everyone right now is to test at home. With more people at home due to the COVID-19 lockdown, now is a great time to test and find out your status.

This week anyone living in England can access a free HIV test kit to do at home provided by Public Health England. The kits arrive in a plain and discreet package, and the test involves taking a small blood sample, which is then sent away in the post with results available within a few days.

Free kits can be ordered here:

In 2019 there were 4,139 new HIV diagnoses, which was a fall of 10% compared to 2018. Over 106,000 people are living with HIV in the UK and modern medication means the vast majority of people diagnosed with HIV can expect a normal and healthy life, and cannot pass on the virus. However, 42% of people continue to be diagnosed late which is bad for individuals and for the NHS.

Anyone can be at risk of HIV and regular testing is crucial to stopping the onwards transmission of the virus. It’s recommended that anyone with a new partner should test once every 12 months.

The UK Government has committed to ending new cases of HIV in England by 2030 and has pledged to increase HIV testing as a crucial part of achieving that aim.

‘I’m proud to support National HIV Testing Week and play my part to end HIV stigma. As I found out myself, testing for HIV is quick, easy and painfree. We’ve made huge progress in the fight against HIV and normalising testing is one way all of us can take us closer to ending new cases full stop by 2030.

‘Testing at home has now become common practice in our efforts to curb the spread of COVID-19 and to look after our own health and others. Using that same approach, this extra time at home is also an opportunity to test for HIV which takes less time than to make a cup of tea. I’d encourage everyone to order a test and help give HIV the finger.’

‘Testing for HIV has never been easier. We now have an opportunity to end new cases of HIV by 2030 and it starts with more people knowing their status. The vast majority of people who test get a negative result but for those who do test positive there’s a huge amount of support available to help in processing that diagnosis.

‘I’d like to thank Blackpool South’s MP Scott Benton for their support for National HIV Testing Week and Owen Mumford for donating self-test kits for Parliamentarians to use. MPs have a key role in helping break down barriers to testing and showing it should be no different from having an eye test or going to the doctors, and that it’s something to be proud of.’