Taking the knee - why it’s time to stop 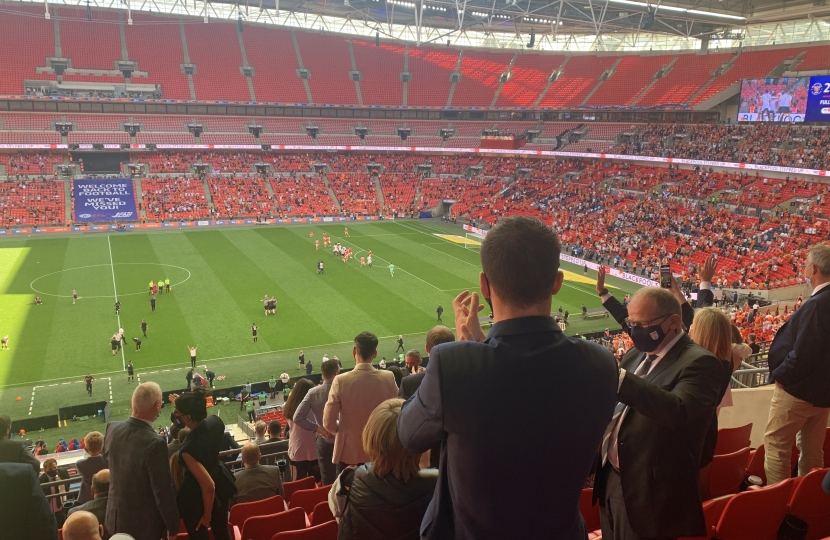 The other night I watched England’s football friendly against Austria at the Riverside Stadium in Middlesbrough. Whilst England’s performance sadly wasn’t much to talk about, players ‘taking the knee’ and subsequently being booed by a large proportion of the crowd was.

Since fans were allowed back into stadiums several weeks ago there have been a number of instances where fans have booed this practice. For example, the boos were obvious to hear from the Blackpool fans at Wembley during Sunday’s play-off final and at Blackpool’s home game against Oxford several weeks ago, both of which I attended.

I’ve given my opinion on this issue a number of times previously. I don’t think I’ve spoken to a single person who doesn’t agree that racism is wrong and there is always more that can be done to tackle it, both in football and in wider society. There are many examples of initiatives over the years that have been launched to do just that.

Whilst no country will ever be perfect and you can never account for the actions of every individual, I think the U.K. can be held up as one of the most tolerant and diverse countries in the world. Football, and sport generally, has also come a long way with regards to tackling racism over the last generation or so.

This time last year we saw widespread vandalism and disorder from groups claiming to be ‘anti-racist’, including buildings being smashed up, police being attacked and historic monuments, including that of Winston Churchill outside Parliament, being attacked. The behaviour of these groups, particularly the ones acting under the banner of Black Lives Matter, did nothing to promote equality or race relations. In fact, all they did was promote division.

It was at this point we started to see the football authorities promoting Black Lives Matter and using this in promotional material, on shirts and even players ‘taking the knee’, which was facilitated by authorities at the start of every game. Whatever people say, players had no choice but to do this (imagine if one had refused to do it and the press they would have received). We even saw Keir Starmer and Angela Rayner photographed taking the knee.

What many of us realised - and what the football authorities seemingly didn’t - is that Black Lives Matter is a political movement and also promotes some disgusting and extreme policies, such as abolishing the nuclear family and defunding the police, as well as many others.

Whilst I don’t doubt that the football authorities had genuinely good intentions, I believe they were misguided and that they should have devised their own campaign at the time, rather than seemingly allying themselves with a political movement.

This was always going to end badly and the first time fans were let back into the stadiums the gesture was booed. The FA and football authorities have held many previous anti- racism campaigns which have been well received and welcomed by all. It is time that the football authorities refreshed these campaigns and their approach to tackling racism rather than persisting with this overly political and divisive practice of taking the knee.

To suggest that fans “aren’t quite understanding the message”, as Gareth Southgate has done, is an insult to their intelligence. Fans understand perfectly well - they are just sick and tired of being preached and spoken down to. They are there to watch a football match, not to be lectured on morality.

It is the football authorities and elements of the media who aren’t understanding the message. Find something we can all support and ditch this ridiculous empty gesture.

This weekend we take on Romania in our next warm up game. I’ll always passionately support England but the FA and England team need to review their approach to taking the knee fast to ensure that it doesn’t alienate the majority of decent football fans.